I was recently asked to give a math lesson to a group of 7th graders, which I don’t normally do, on the topic of rates, which, again, I don’t normally do. But I was really excited by the prospect, because I’d noticed something weird at my local grocery store, namely the price of pine nuts (in Dutch “pijnboom pitten”).

I showed the students the three options for buying pine nuts at the main Dutch supermarket, Albert Heijn, and simultaneously highlighted and obscured important information for them: 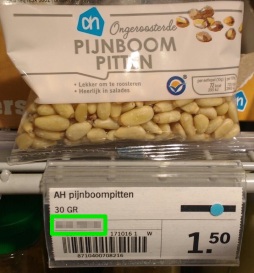 Then I asked them the following three questions for them to work out in groups:

I gave them ten minutes to work on it. Half of the groups had a good sense of where they should start and quickly came to the correct answer. Other groups didn’t have a good sense of where to start, so I asked scaffolding questions like “what makes something a better deal? How can you quickly tell if the medium is a better deal than the small?” and “what important information is given on the price tag? What do you think I covered up?”

You end up with the sort of surprising answer that the medium package is the best deal, even though one assumes (or maybe 7th graders don’t yet have that assumption) that buying in bulk results in a better deal.

If I’d had longer, we could’ve delved into this idea more, that the price of something is not just the raw price of the goods itself but the materials used, the convenience of it, etc. I think these sort of discussions are important to have in today’s society and that in math class we should be grappling with the sort of questions of the real cost of goods and services. I could imagine a much larger unit about, among other things, environmental justice. Do you have any other good non-math questions that you’ve asked in math class?

Middle Years and Upper Grades math teacher in the Netherlands teaching both within the Dutch national curriculum and the IB MYP and DP.
View all posts by katenerdypoo →
This entry was posted in Uncategorized and tagged environment, Math, MTBoS, MYP, questions, teaching. Bookmark the permalink.